Did you get an Enneagram Type 6 on your personality test? Read on as we focus more on what this type really means! 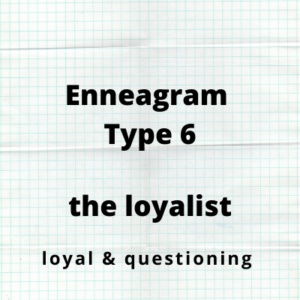 The Enneagram is one of the many personality tests that explains how people interact with the world and how they handle their emotions. The model defines nine personality types and maps them in a nine-point diagram to see how they’re related to each other.

Enneagram is from the Greek words Ennea and Gramma, which mean nine and something is drawn or written, respectively.

By knowing how each type sees the world, we can now better understand why some people act a certain way. Furthermore, by describing how each personality may react to a given situation, the Enneagram can also be a means for self-improvement.

The nickname to best describes the six Enneagram type is probably ‘The Loyalist’. Its key characteristics are:

Responsible and dedicated, Loyalists are those who must belong to a social group and fit in with everyone else. They may be Phobic or Counter-phobic, which explains how they choose to present themselves to the world.

Phobic Loyalists opt to stay in their comfort zone and stay away from the unknown. They’re also open about their weaknesses so others can better understand their way of thinking.

Moreover, it’s their defence mechanism to avoid getting manipulated.

On the other hand, the Counter-phobic Loyalists have an irrational fear of fear itself. They often break the rules and display a tough exterior to hide their uncertainty on the inside.

Loyalists are driven by security and a sense of commitment. They stand by people who are truly close to their hearts and strongly value those who reassure them of how special they are.

Trust is the most important value for them, too. They may think about hypothetical scenarios a lot but knowing that someone has their back can be very comforting.

They continually seek peace within themselves, even though it can be challenging at first. By trial and error, Loyalists gradually develop confidence and trust to handle any given situation.

How to recognize an enneagram type 6?

Loyalists easily blend into their social groups and are always there to support their loved ones. They’re good at keeping secrets, too, since they take privacy seriously.

As employees, they’re very loyal to the job and willing to work overtime if it means supporting the company and making the tasks run smoothly.

They actively seek reassurance for their actions. They can also sense potential problems even before they come, which gives them a feeling of control if ever they’re faced with them again.

Enneagram Type Six: What they’re like at different levels

Caring and generous, Loyalists are great team players who move their friends and colleagues to do better. They’re hardworking and valuable employees, too, who selflessly serve the company and committed to improving their skills.

They can also act gracefully even under stress. Loyalists usually trust others easily and through courage, don’t hold back and aren’t ashamed of expressing themselves.

Loyalists often let go of their worries and focus on things they can change in the present.

Loyalists are highly critical and sceptical.

They always seek for security and approval from their social groups. And, once they become aware of their flaws, they’ll more likely suffer from low self-esteem.

When they feel they’re losing their ‘position’ in a group, they start getting nervous and agitated. So, to avoid disappointment, they mentally ready themselves with the worst-case scenario before doing a task.

Loyalists tend to over-analyze things first even before they arrive, which then makes them more anxious. This behaviour can confuse others and leads them to an endless cycle of worry.

At unhealthy levels, Loyalists become very suspicious and paranoid of everyone and everything around them. They’re prone to having anxiety, too, since they’re very vigilant to all sources of harm (whether imagined or real.)

This leads to having fake memories and they may start suspecting others are out to fool them—when in fact, they’re only fooling themselves.

In some cases, Loyalists can have huge amounts of anxiety from the constant illusion of danger. This causes them to cling onto a “stronger figure” to help them get through each day.

And, when they’re finally fed up, Loyalists will blame others for their shortcomings and say it’s their fault—when in reality, it was all in the Loyalist’s mind.

Learn more about the work of Fara Curlewis and Pranic Healing through her series of informative videos.


Contact us to find out more >Click here to ask your questions & learn more about us & Pranic Healing!